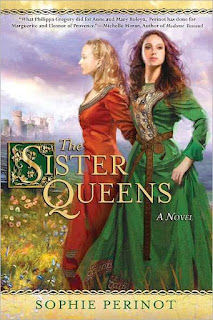 Like most sisters, Marguerite and Eleanor were rivals. They were also queens.
The girls were raised together at the 13th Century court of their father, Count of Provence, the girl must pay their dues, as all young girls must, they are soon married to rival kings but they are never truly parted.

Patient, flawless, quiet Marguerite, the oldest of the Count’s four daughters who is always use to being the first to do anything, becomes Queen of France. Her husband Louis IX is young and beautiful and he is considered to be the greatest monarch of his age but he is also a religious extremist who denies himself of all pleasure – including the love and affection that his young wife desperately craves.

Zealous, determined and stubborn Eleanor, the second daughter of the Count’s four daughters and who is always in her sister’s shadow, becomes Queen of England. He husband Henry III is neither young nor handsome but Eleanor discovers that he is a great man – showering her with love and affection – however he is a very bad king.

As the girls’ lives take their different paths, each girl must face her own demons – Marguerite the lack of love from her husband and her overbearing mother-in-law Blanche of Castile, and Eleanor the hostility of her husband’s court and his weak hold on their country. Even though these two sister, these two queens are separated by an ocean they continue to play an integral part of each other’s lives through their letters. As the years pass, the sisters learn to set aside their rivalry and soon learn that the trait they find exceedingly annoying in each other is exactly what they need to survive – Marguerite borrows Eleanor’s fiery fortitude in an attempt to win back her husband’s love and affection and Eleanor adopts her sister’s calm demeanour and sets aside her pride in order to repair her marriage with Henry after a political clash.

The Sister Queens spans twenty years and an array of countries – from the splendid courts of France and England down into the Holy Land of Egypt and Jerusalem on Crusade. Sibling rivalry, family, politics, love and lust are all woven into an amazing story about two Queens who were sisters above everything else.

I absolutely adored this book! It was a fully engaging novel and remarkably relatable – I could totally imagine these two sisters carrying out a relationship through letters throughout their lives as rival queens. I was swept up in the stories of the Savoy sisters from the get go, even the lesser known sisters Sanchia and Beatrice. Each sister had very unique personalities that were richly developed throughout the story. While the sisters were different in temperament and life challenges, they were both so fascinating and lovable, although I have to say that I preferred Marguerite to Eleanor, just slightly. It was a very enjoyable read and at time very difficult to put down.

Ms. Perinot is a solid writer with the ability to create characters that have a life-like, jump off the page quality about them. Not only were the sisters beautifully developed but their husbands, Louis IX of France and Henry III of England, as well as Louis’ (wicked) mother Blanche of Castile, were all equally amazing. The story was beautifully written as well – the dialogue appeared to be written effortlessly as it flowed in a natural way, it never felt forced or fake. I especially enjoyed the letters that opened each chapter between the sisters; it felt as if the reader was getting an intimate look into the inner workings of the girls’ minds.

My only complaint about the book was that it ended too soon . . . I would have loved for it to have covered the rest of the sisters’ reigns! I would strongly recommend this book to anyone who is a fan of historical fiction and especially to those of you out there who have a sister – I saw so much of my sister’s and my relationship in these pages (I saw myself being Marguerite and my sister as Eleanor) and I was able to reflect upon our own relationship. This was an amazing debut novel from Ms. Perinot and I look forward to reading her future works.